Last night, on the 3rd of May, we celebrated our fifth season as a club and recognised individual achievements by first team players this 2018/19 season. In what has been a difficult season points and results wise, the collective unity and team spirit that this team has developed over the last year is incredibly strong as summed up by this year’s multi-award winner, goalkeeper and No.1 Hannah Lamb who spoke about how inclusive the team is and how that has reflected in her playing this season.

The night opened with a ‘bruise quiz’ that had been decided on at the last Team Meeting, which was made up of player bruises from this season that people had to guess the player each bruise belonged to. The winner of the quiz, first team player Amy Brown, won a selection of first aid gifts for guessing the most player bruises. Manager, now Head Coach, Jay Baker then officially introduced the Awards Night, discussing the development of an AFC Unity legacy approach, mentioning the previous awards we have won as a club and how far we have come since 2014, when the club started. This involved a look back on the previous seasons and how in our first season we achieved promotion but that the collectivism, team spirit and approach now is unlike anything we have ever known. For the first time ever, all players that can stay on are doing so, as we build something incredibly special. Linked to this, Jay talked about what we mean by ‘success’ citing a quote by Johan Cruyff and how important collectivism is over individualism, and as well as winning games – for us as a club – ‘success’ is about how harmonious and enjoyable the environment is and on this we have been very successful this season. Jay finished his introduction by talking about the meaning of external validation and whether you win an award or not, what matters is that you believe in yourself, the belief has to come from within, not outside (even though outside acknowledgement and appraisal is obviously nice!)

Jay then moved on to presenting the Red Star Awards, which are about recognising first team players for different individual traits that they have brought to the team this season. Jay spoke about what each player brings to the team alongside the individual statistics – goals, appearances and assists – of each player. The team then thanked Jenna Bacon who has been amazing this season looking after everyone by providing first aid to most of the team. We then broke for some lovely food from The Showroom, who we thank again for another amazing venue hosting!

When we returned from food, first team player Amy Brown presented the Silly Awards, which had been nominated by players. The winners of these awards were as follows:

Clumsiest player: Jodie Spillings – who was awarded some first aid supplies.
Best miss…training and game: Stacey Leigh at training (we are still trying to work out how this happened!) – who was awarded her own personalised water bottle (anyone who has tried to give water to Stacey in a game before will understand why).
Club comedian: Becky Gay – who was awarded a Peppa Pig microphone.
Wackiest goal celebration: Becky Gay – who was awarded a unicorn for her galloping celebration.
Best changing room Dj: Amy Brown – who had to pick herself a Boyzone CD as an award.
Cleanest boots: Jane Watkinson – despite strong competition from Michelle Garrigan for her very clean boot baths, Jane was awarded some vegan soap and sponge given her injuries have meant her boots have stayed very clean (or dusty)!

After the Silly Awards, we moved onto the Integrity Award, which is for a first team player involved in the club, based on its vision, values, and mission, overtly standing up for and defending these, showing a dedication and commitment to setting an example to others – shortlist proposed by and voted on by the team. This was such an unanimous decision, there was only one nomination put forward by six different players rendering voting unnecessary! First team player and Director, Sophie Smith, presented the award to the winner, Jaimee Reeve, in recognition for all she has done in terms of the Football for Food campaign and more recently with tackling Period Poverty, alongside Jaimee’s overall very supportive and inclusive approach to everyone around her.

Next up was the Collective Award, selected primarily by Ultras (secondarily by other supporters) as being the fan favourite this season. Supporters Marc Duffy and Mike Leigh presented the award to the winner, Rachel Rodgers, who now becomes one of the most decorated AFC Unity players as she adds to last year’s Hope Over Fear and Unity Awards! 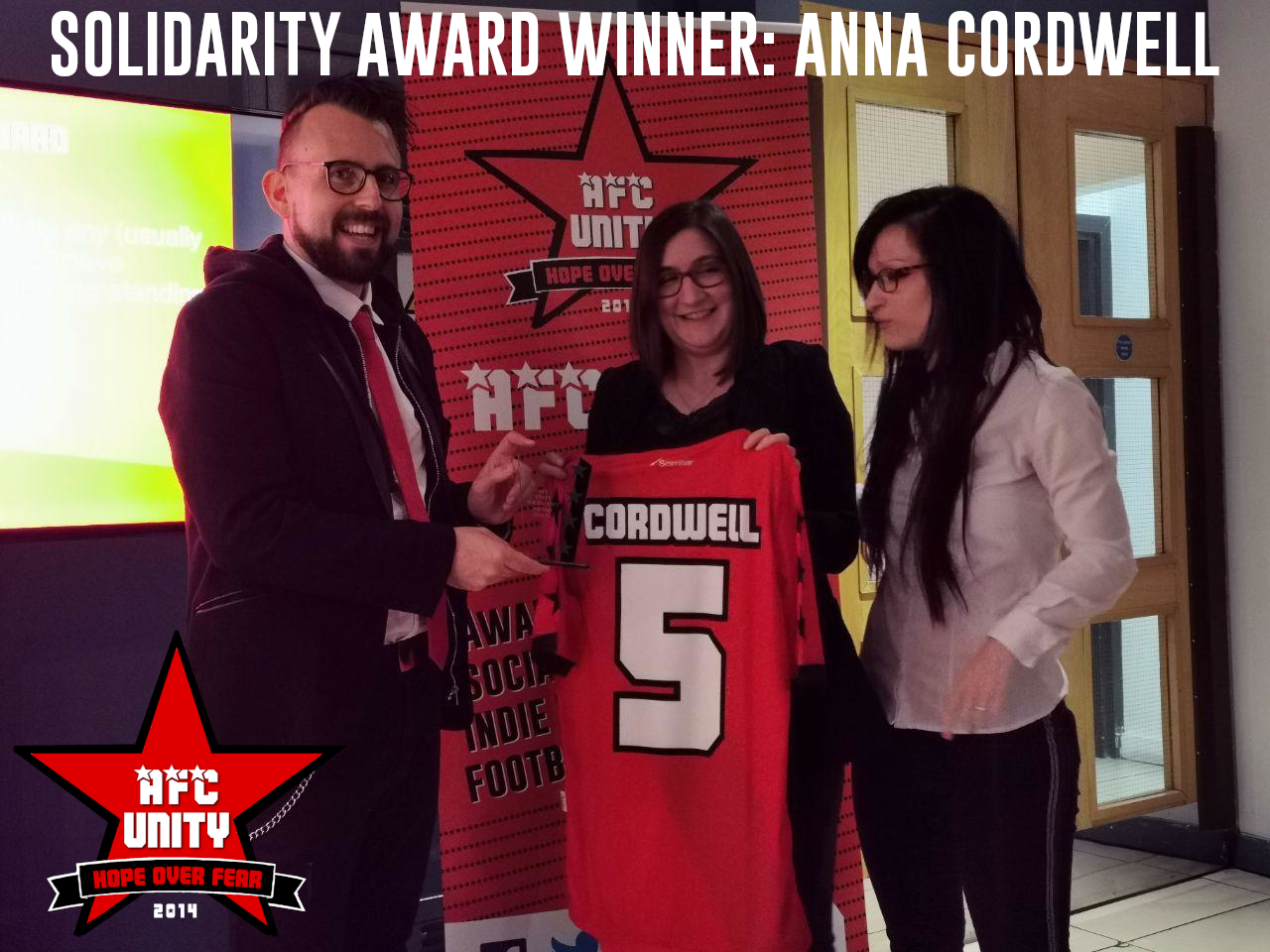 Jay & Jane then presented the Solidarity Award, which is for outstanding achievements by any (usually non-playing) club personnel who have demonstrated dedication and a long-standing commitment to the club. This went to Anna Cordwell, who has just recently resigned as Chair and Director at the club after 5 years, with Anna involved from the very beginning. Anna has been a fantastic critical friend and without her we wouldn’t be where we are now. To recognise these 5 years, Anna was presented with her own AFC Unity kit, with No. 5 on the back!

Jaimee then spoke about the Football for Food campaign adding to what she said when winning the Integrity Award, mentioning that this season we have collected an incredible 340kg of food donations for the S2 Foodbank, which we aim to build upon next season!

The Breakout Award was then next, which is picked by the manager – for the player that responded to the coaching during the season and notably developed as a player technically, tactically, socially, psychologically and physically, on and off the pitch, in line with the club’s ethos. The winner was Pippa Joseph who has had an amazing first year at the club, with Jay mentioning how coachable Pippa is, her phenomenal ability to press off the ball, pass on the ball and her 100% positivity and warmness to all around her.

We then had a break with players voting on the Unity Award, which is for the first team player voted on by their teammates on the night (or via proxy), confidentially chosen, in reference to ability, attendance, and attitude, and how they have represented the club and their team on and off the pitch. Winning her first of three awards on the night, Hannah Lamb was recognised by her team mates for an amazing season where she has been a role model to all off and on the pitch and who has left us – any many opposition teams – all marvelling at her many amazing saves all season! 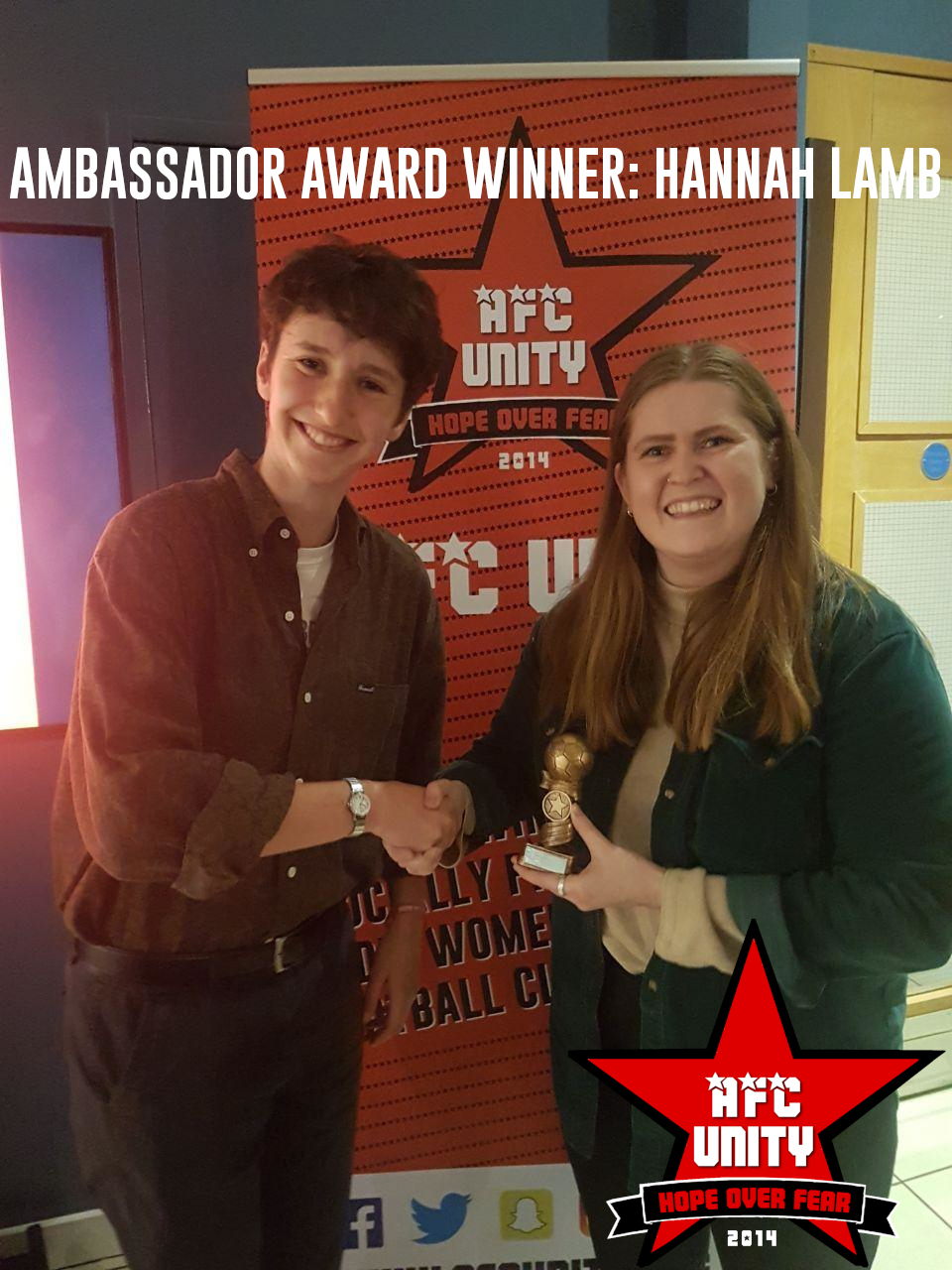 Finally, Jay presented the Hope Over Fear Award, which is the manager’s award for best player of the season, for a first team player who has turned negatives into positives and adhered to, trusted in, and enacted the manager’s vision, AFC Unity’s football philosophy, and acted as a role model, inspiration, and positive influence on the team as a whole. Jay said that this player was someone who has challenged him to be a better manager, coach and person; someone who plays our style perfectly and is only going to get better and better; someone who joined for the ethos; someone who attends everything – every social, every meeting, every training; and someone who, like last year’s winner, was in his mind for this award since the autumn. The winner of this award was Hannah Lamb, with this the second year running the players and manager have chosen the same player for their respective awards. Jay added that defeats would have been much worse without Hannah’s performances and that she won her awards entirely on merit as a goalkeeper truly ahead of her time.

We also said a sad goodbye to first team player Molly Manterfield who will be moving abroad after a very successful first season with the club, tallying up 24 appearances and 1 goal! 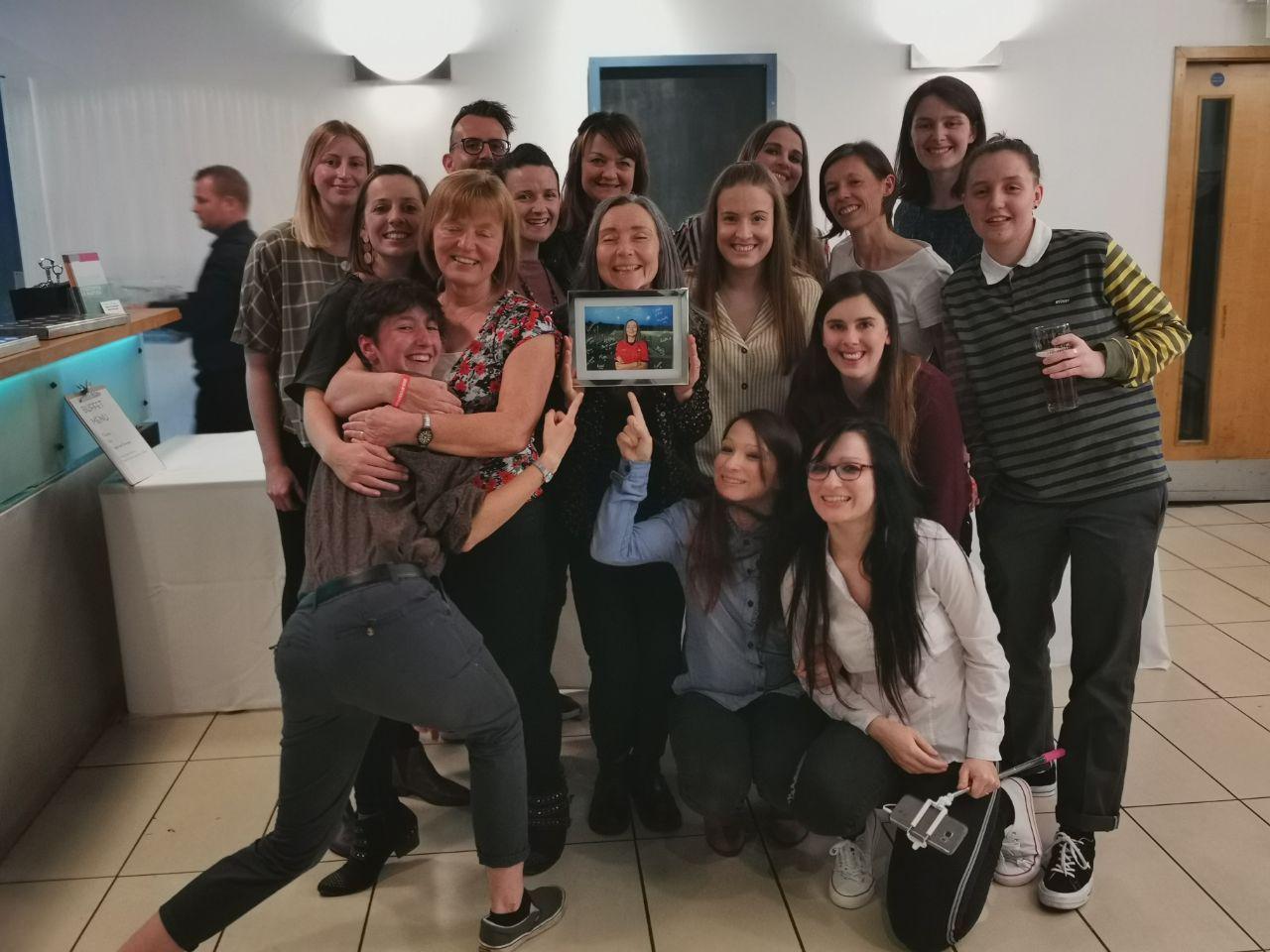 This was also No.14 Corinne Heritage’s last season playing 11-a-side football. After 3 seasons with the club Corinne has been an invaluable part of every aspect of the club. In her 2 seasons as part of the first team, Corinne has 34 appearances scoring 2 goals, and was last season’s Integrity Award winner in recognition for her hard work at Solidarity Soccer and furthering the community ethos and vision of AFC Unity. We are very proud of all Corinne has achieved and she will be sorely missed by everyone at the club.

Until June, Hope Over Fear!